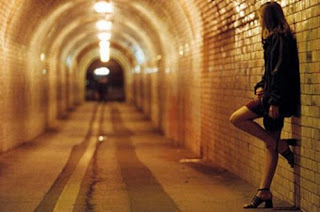 It has been a while.I don't have as much time for the blog as I did previously, but I will go into more details on that another time. A topic that has been coming into my inbox regularly as of late is escorting. A number of girls are writing to ask if I escort, and if this is something common in the community. I know many of you will be looking into this as debts mount and the sites remain quiet, so I wanted to present you with my opinion on the subject in the hopes that it will help you make the best decision for you.

An escort is defined by the dictionary as one of three things:


Definition C is the what we are discussing so let us first consider the fact that it describes an escort as someone who is hired to spend time with another as a companion. Legally, in many countries and the majority of American states, you are not allowed to pay another person for sex. Escorts work around this by saying they are being paid for their time and that anything of a sexual nature that occurs during this time it is at their discretion and between two consenting adults.

I appreciate that there will be some escorts that do not sleep with their clients, but I would bet good money this is very small percentage. You will be expected to perform sex acts as an escort, so in truth it is better to realise you are getting yourself into the world of prostitution and solicitation. You are being paid to have sex with people, regardless of the way it is dressed up. If it wasn't about sex then the escorts ads online wouldn't outline what they will and wont do in the bedroom. If you want to get into this, go in with your eyes wide open for your own safety.

So knowing that this particular branch of sex work is shady at best in legal terms, is this something you really want to risk doing? There is always a chance of being booked for solicitation, and do you really want a criminal record associated with sex work? It is not going to be helpful should you want to change careers later on.

Career prospects and legal issues aside, one of the most important things to consider if your personal safety. Escorting (which I will now refer to as prostitution) is dangerous and therefore you really need to think about what you are truly getting yourself into. Prostitution is the most dangerous profession in America. 204 out of every 100,000 prostitutes are murdered in America alone, and considering there are 40 million prostitutes world wide, that is a lot of death*.

Even with agencies there is no guarantee of safety. If it doesn't kill you, then you are still almost promised violence of a physical and sexual nature. A psychologist called Farley has done numerous studies of prostitution and found some tragic statistics related to the violence perpetrated against these women**:


It brings tears to my eyes to know nearly half of those women were raped over five times. Take a moment here and really think about those statistics and the people behind them and what they actually mean. If the physical assault of prostitution isn't enough, then what about the emotional impact? What happens to our minds when the industry takes its toll? In another study conducted in 1998, Farley found that two thirds of prostitutes suffered with Post Traumatic Stress Disorder (PTSD). The number suffering with the condition was twice as high as Vietnam veteran suffering with the disorder, and the severity of the symptoms - emotional numbness, recurrent nightmares and flashbacks - was also more extreme than among the treatment seeking veterans***.

I would never judge another human being for working as a prostitute, and I know sometimes there seems to be few options in the world left open. I just know for me the emotional impact would be too much. I have had the opportunity to escort, but I have always declined, even when offered huge sums of money because in part I like to still be able to say I have never slept with anyone for money. Actual sex is something just for the lovers I choose to take. It's not a commercial exchange. It's a boundary I will never cross.

The other reason I don't escort is because I don't trust men who buy sex. I know they aren't all bad, blah blah blah, but I don't trust the majority of those men to see me as a human being. I believe they see me as a sexual object for their gratification and I believe that even though I may get away with a few decent men, for every one of those, there will be two who will turn out to be rapists, or violent, or thieves, or stalkers or murderers. Men who will buy me to exert their power over the "weaker" sex. Some of those men display their darker nature to me online, but thankfully I'm safely tucked away on the other side of the Atlantic for the most part.

None of us deserve violence or sexual assault in our lives, and regardless of whether you are a sex worker, a homemaker, or just a single girl who is a little bit drunk and out of the town, no one asks for it. I am not at all into victim blaming, but lets keep ourselves safe where we can in this situation. Don't put yourself in harms way. As grown women, we all make our choices, but we all deserve better than this. The studies do not have promising results and sadly, there is rarely any form of gain for women in the sex industry. It is all too often romanticised by the few fortunate enough to make a lot of money or have a good experience, (*cough* Secret Diary of a Call Girl *cough cough* Bell Du Jour *cough cough cough*) but the are in an extreme minority. Most sex workers stay poor. Most prostitutes are assaulted. I haven't even gotten into the risks of STD's, but of course that is always there even with a condom. Plus if you are raped, then chances are there will be no condom use anyway.

I think of you girls often when I'm working and out with Beau. Many of you have touched my heart deeply with your stories and I can't bear to think of you in such a dangerous situation. I trust you all to make your own decisions, but please consider this one carefully if it has been on your mind. Camming and phone sex are the safest ways to work in the sex industry, they keep you physically safe and you can switch it off and be done with it at any point. I want you to have the option to walk away from the sex industry with as little regret and as few scars as possible.

Sources:
* This previously contained a link to the onlineschool with their statistics. The owner of the link was in my opinion an absolute prick about my site and he demanded I take down the link based on "information Google was providing," stating I have dodgy dealings with the links on my site. All unfounded bollocks and most likely simple prejudice against a site with adult content. If you would like the link to these statistics please email me at londoncamgirl@gmail.com
** http://womensissues.about.com/od/rapesexualassault/a/Wuornos.htm
*** Female Chauvinist Pigs - Ariel Levy - 2005