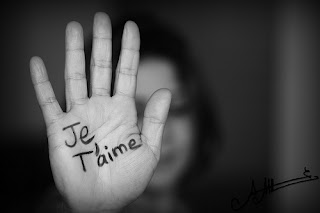 So I had a customer enter my room who asked if I spoke French. I don't speak French. I don't count my poorly remembered GCSE French as speaking the language. I can string together a few phrases and understand bits and pieces of conversation but that is by no means speaking French. In the aim of fairness I replied that I did not speak French in his native tongue "Non, non, ne pas parle Francais." Even that reply was broken at best, but he chose to ignore this and decided to try and have a conversation with me in French anyway.

It was pretty hard going as although he was typing the words out, when I am streaming my chat in HD I find it takes up too much of my CPU usage and bandwidth for me to surf the net. It's slow and makes getting back to the chat window tricky so I tend to just leave it. Had my laptop been faster I could have popped his text into an online translator like Babel Fish and then we would have been laughing, but as it was I had to rely on my memory.

Emoticons transcend language so sending me love hearts would illicit the response "J'adore >Customer name<" from me. But then he started asking me if I would want to have sex with a vieux noir. The longer I took to respond the more fervently he repeated the question in all caps. I had no idea what a vieux was and I was a bit concerned I was agreeing to something illegal or something I couldn't actually so but decided to just say "Oui, oui j'adore un vieux..." and hope for the best. For part of the conversation I was convinced vieux meant horse, but then I remembered the word for horse was cheval and felt a little better!

Looking up the word later to my relief I saw it meant old man. So basically the guy wanted to know if I would have sex with an old black guy. I am now glad I said oui!

Another kind of french I was speaking was of a more blue nature. I had a customer ask me to repeat the four lettered c-word to him over and over again while I touched myself. That was a little bit strange to say the least. He told me he got off on that word being said by an innocent looking girl.

This whole experience has so far piqued my interest psychologically because the things they come out with are so strange sometimes. The fantasies they share so grotesque and forbidden they can probably only safely be lived out on the internet. Men demanding I pretend to be their little girl, wanting me to pretend I'm 12 in role play and call them daddy. One guy told me he was having sex with his sister while he watched me touch myself. I knew it wasn't true but it was obvious he wanted me to react to it and if they are paying for your time, then really you kind of have to put aside your personal opinion. Fantasy isn't illegal so if they want to make up a load of bull for me to respond to or perform for them then as long as they are paying I will keep my game face on and my answers as tasteful as possible. However, if they were on camera showing me something illegal, my personal integrity would have to come first. I couldn't watch something that sick, I'm not that cynical thank God!

If my adventures are sounding like fun or you would like to find out more about being a webcam model please take a look at my agency Internet Modeling. They have information and application forms here.

That's all from me for now. Will try and post again soon! Catch you later.